You’ve probably never heard of Jeffrey Brown.   The independent Comics industry is a field few people, particularly English professors steeped in “The Canon,” would realize is hosting one of the most important artistic avenues since Easy Rider hit the movie screens in 1969 and started a film revolution in Hollywood. The difference between these two movements is that while one received the benefit of advertising space and the public interest, like I said at the beginning, few people have probably heard of Jeffrey Brown.

You might have spotted his work already. Darth Vader and Son, as well as Darth Vader’s Little Princess have been commercial success due largely for the fact that one only has to slap the

name STAR WARS on a product and you’re guaranteed a clientele (I’m saying that as a fan of the franchise). Both of these works play on previous knowledge of the foibles of the STAR WARS universe, but also upon an individuals’ personal experience being a parent, particularly a father. What shines through in these two small books of one liners is an honest pathos. While the writer of this blog has in the past been highly critical of that Rhetorical device in previous essays, the use of pathos here is unapologetic and designed to be the chief strategy in the formation of an aesthetic.

I’ll try to stop sounding like a fucking NPR special and get to the damn point.

I picked up a copy of A Matter of Life over two years ago while I was going through a binge in Comics studies. At the time it was my life’s work to make sure that I would spend the rest of my life reading comics and teaching their merits to comic students. Graduate school has a way of softening some aspects of self-proclaimed destiny and since then Comics, while I have not fallen out of love with them or their potential for students, have become supplementary material—But the dream lives on nonetheless.   What struck me immediately was the nature of the story. 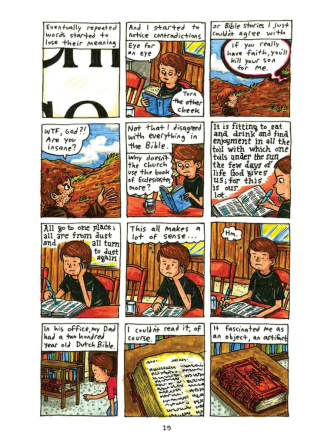 In A Matter of Life Jeffrey Brown narrates his growing up in a Christian household, but from the very first page it’s clear that the book is not about a deepening of Faith:

When I was little I believed in God. At least, I think I did. At some point I realized I didn’t believe. And I hadn’t in a long time. If ever. It doesn’t mean I don’t believe in something bigger than myself.  (6-10). 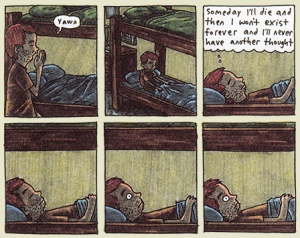 from the right side. This of course then leads into Brown as an adult giving his son a piggy back ride and from there we see his phobia of bugs. The simplicity of presentation and the movement of subject to subject is subtle, and while at times the movement of the plot feels very random, such as the interruption of god’s presence in nature to the scene in which a foot long tapeworm erupts from a dying Cricket during Bible Camp, each moment of Brown’s life is included because it works towards the aesthetic goal. The back of the graphic novel describes the books: an autobiographical meditation on Fatherhood and Faith.

Brown is not an Atheist, a steady reader of the blog should know by now what that is, and he clearly believes that there is some force in the universe outside of human understanding. Brown tackles the objection some might have to that outlook when trying to describe the state of death to his young son who objects to the notion of nonexistence. His son’s response of, “I can FIGHT dying” is one of the most endearing passages of the

What struck me the most however about the text was the conflict of admitting to a lack of belief in this age. Now granted it is no longer a punishable offense to admit you do not believe in the existence of god, but when your father the acting priest of a small community, that choice becomes pretty damn difficult. Brown doesn’t hold back the awkwardness and even confesses in one instance that he lied about his lack of faith to an elderly woman. Why? Who knows? In our day-to-day lives sometimes taking up the mantle of bravery just doesn’t feel like it’s worth the trouble, or what another person needs from us in that particular moment. But still Brown doesn’t ever step back from his lack of faith, and instead meditates on how it has affected his life.

The reader may be disappointed by the end of the graphic novel which seems abrupt and unfinished, but taking a step back and really studying the work, this is an unfair critique. Some have attacked Brown by saying his work is scattered or has no plot. This may be true but hat is not a weakness. As it is advertised on the back of this slim volume, A Matter of Life is a meditation through art. Brown is piecing together his life to determine some inherent meaning. Ultimately what we arrive at is that Brown is a father, a husband, a son, and finally a man just trying to understand who he is, what he believes, and who he wants to be.

Some might immediately object as to why they should care? This is not the Avengers, or Batman, or Wonder Woman that have solid plot lines designed to lead us through a great and epic storyline. In fact, dear reader, you say this sounds boring as fucking fuck. Why is this book worth my time when I can by three superhero graphic novels and enjoy my afternoon unmolested by such deep questions?

For this very reason Brown’s work stands out to

me as a fan of comics. While I love superhero comic books, and, as of this writing, can’t wait to see Age of Ultron, I respect the medium of comics as an art form and the purpose of art should be for people to ask themselves the very same questions posed above. Yes, Iron Man is awesome and witty, but in our day-to-day lives do we possess such wit? If we do not, why not. Does Iron Man ever stop to ask what his purpose is in the grand scale of the cosmos? What is the point of drawing the line between evil and good in the face of a force like Galactus?

For the record I’m not trash talking superhero comics. I love them a great deal and

have an entire bookshelf dedicated just to them. But If comics are to be taken seriously they must experiment with their form more than just launching three new books a month in which Batgirl becomes sidekick for three issues or Black Widow get’s an actual superpower. A real experimentation has to take place where we reassess our understanding of what the form can do and where the artist fits into that experiment and A Matter of Life does just that.  It reduces the grandiosity found in so many other works and centers us back in mundane life. Our lives at time seem to have no coherent structure but assume meaning over time and reflection. A Matter of Life is unlikely to become a film or blockbuster, but it is worth your time.

You don’t need God to be good.

This precedes a three pages tangent in which Brown helps an elderly man who has fallen in the shower. He doesn’t lift the man up or use super-speed to change time so the event doesn’t take place. He offers the man his time and his support. We may not be superheroes, but the little acts in our lives determine our character more than what we believe in.

For those of you who were waiting for an explanation for the title:

As for your next question, the front cover shows Brown and his son standing in a museum, most likely one dedicated to science if there is a Tyrannosaurs Rex exhibit, while the back shows an empty church. My guess is this a rhetorical gesture to show that while the faith in the church is gone, emptied from his life, there is still the avenue of fatherhood which now assumes more importance in his life.